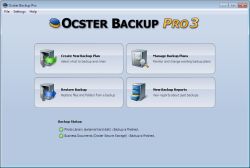 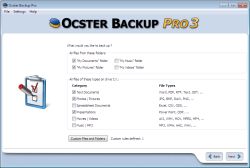 The Good
* Straightforward and easy to use.
* Nice, aesthetically pleasing interface.
* Allows users to backup individual files or whole folders.
* Includes handy "shortcuts" to backup common folders, and file extensions.
* Includes an "exclusion" filter which users can use to exclude specific files, folders, or file extensions from being backed up.
* Allows users to restore files/folders selectively.
* Has multiple methods of compressing and encrypting backups.
* Allows users to schedule backups to automatically occur.
* Gives users the ability to keep extensive reports and automatically e-mail the reports.

The Bad
* Users a proprietary format for the backed up data.
* One password related bug when using "no encryption" option.
* Lacks any ability to easily backup third party related data.
* Automatic backups can only be scheduled for a daily or weekly basis.

Okay - so even though I uninstalled this crap, I have this Ocster Special login when my PC goes into sleep and upon reboot

STAY AWAY FROM THIS PROGRAMME! - NO KIDDING

So I go to the site to login to my account and now I get:

Database Error: Unable to connect to the database:Could not connect to MySQL

This is without a doubt a terrible outfit and the fact that they also offer Ocster Secure Storage "in professional data centers" is very scary given the fact that their site does not work efficiently!

Well, as usual, I don't have the horror stories to report that other users are experiencing. Actually, I find this to be an interesting product, although difficult to review.

Yes, the registration is a bit convoluted, but I didn't experience any problems. Unlike most offerings, the website isn't anonymous. I can't vouch for its security. It has three processes (one associated with a service), and two access the Internet. It sends more information than usual (although harmless) regarding version (we've been given a special GOTD version), OS, locale, etc., when checking for updates.

The free Ocster account isn't for storage (you have to pay for that, I think that the price is too high), but it can be used to email backup reports to you. I don't know what all is being transferred over the Internet, it's not a huge amount, but since Ocster Backup supports not only backup-set encryption but claims to use link encryption, it probably wouldn't do any good to snoop the packets.

My impression is that this software was written by someone who knows what they're doing. The problem is that it's designed for UI simplicity, so there are very few options, and there's little documentation on what it actually does.

As usual, I find Ashraf's lack of technical knowledge to result in misleading reviews. Ocster Backup does use the Volume Shadow-Copy Service, so it can backup in-use files. That's desirable, but slower than simply trying to zip the files directly. It always automatically uses incremental backup. The proprietary format provides rapid, consistent, automatic retrieval of the latest version of the backup. The downside is that you can only retrieve the latest version, and that could be a deal-breaker, but there's a workaround. The proprietary format itself isn't an issue, you can always keep a trial version of the software available. There's also a free version of Ocster backup, but since it's feature-limited, it probably can't restore some Pro backups, depending upon options selected.

Time to create volume snapshots and possibly time to access the Internet for whatever (it looks like it may be using Amazon's cloud service) are likely the reasons for significant variation in backup time (it can appear to hang sometimes).

Internally, there's some sophistication. It uses XML files to track a great deal of information. Reports are in HTML format. It can handle hardlinks, symbolic links, and network drives, and supports Windows 7 and 64-bit systems.

The workaround for using only the most recent backup is performance-efficient but wastes space. Let's say that you want a week's worth of daily backups. You could schedule a "Monday", "Tuesday", etc., backup dataset of the same data for corresponding days of the week. Each base backup would be full, which wastes space. However, for each daily backup dataset, only incremental changes at one-week intervals would be stored, so the subsequent backups would be quick, and you could select which day's data to restore.

As for some of the other complaints, I generally find them to be groundless. If you want to uninstall GOTD offerings, set a System Restore Point just before installing. Use the application's uninstaller first (it should be in the standard Control Panel location), then do a System Restore. Ocster doesn't make "major changes" to your system. The changes that the Ocster installer itself makes are rather small. Unfortunately, like almost everything here on GOTD, they're not using the Microsoft Installer, which every Windows program should use. The changes that you see are from the Microsoft Visual C++ redistributables, which do use the Microsoft Installer (of course). I don't have time here to go into all the complexities and sophistication of the Microsoft Installer. You get an automatic System Restore Point, it's capable of tracking individual components which can be installed and de-installed on-the-fly automatically as needed, it handles side-by-side installations, it can repair installations, etc. Many of the Registry entries are from duplication of much of the Registry in what the Microsoft Installer thinks are user accounts, but just belong to programs. Those generally get deleted on the next reboot or so.

Please click on the link below to complete your registration and receive the unlock code for Ocster Backup Pro 3.

And this is the outcome...

Hope it's just my end but thought I'd let others know.

Queryable: Find Photo by Text
Queryable is an iOS app that allows you to find a photo in albums use a text description, completely offline.
$1.99 ➞ vandaag gratis

My Time Off Tracker
Is designed to help you quickly check how much time off you have.
$0.99 ➞ vandaag gratis

Paranormal Territory
Does your mind starved for puzzles, and your nerves from thrill?
$1.99 ➞ vandaag gratis

Over The Bridge PRO
By building bridges between the various platforms try to get as far as possible!
$2.29 ➞ vandaag gratis