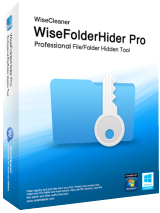 A word of warning. Be VERY careful what you're doing with your password for this software because if you forget it, there'll be a substantial bill from Wise to get it back. That's because although the paid-for PRO version includes a no-cost password recovery facility, today's PRO. . . doesn't. In that regard then, this PRO version is hardly any different to the always-free version and thus seems to render the giveaway largely pointless.

Where the free version is concerned, I've known users forget their password and think ah, well, no problem: I'll just uninstall Folder Hider and then DL it again from Wise and re-install. but then they've found that Wise wants their *original* (forgotten) password otherwise it won't allow usage of the new, downloaded app.

I'm assuming there's some way of getting around this but haven't ever had the time nor inclination to wish to explore further, especially as some users have uninstalled using Revo Uninstaller PRO and Advanced mode for cleaning up. . . but still have been unable to either (a) get back the files / folders which they 'lost' because of password amnesia and (b) unable to install Wise Folder Hider again because that forgotten password was still being asked for by the newly downloaded / installed software.

Waaaay too much hassle for me, which is why I stick to VeraCrypt and/or Safehouse Explorer: always free, and you can learn how to use 'em both by spending no more than 120 minutes on YouTube, watching the video tutorials from countless satisfied users.

The file system -- ntfs with most Windows installs nowadays -- uses tables that store the file name along with where all the bits & pieces of that file are located on the storage media. Malware writers came up with the trick to put files in the 1st, hidden section of the hard disk, in the bios, & in extreme cases, in hard drive firmware [the code stored in its chips that make hard drives work]. This gives the malware what's called persistence -- you can delete other files belonging to the malware & it always comes back -- and it can tell Windows [&/or other OSes] to not see specific files, & if you can't see them, neither you nor your security software can get rid of them. [Virustotal BTW just added the capability to scan bios files to help fight or guard against this real threat.] Thankfully most malware isn't so sophisticated, & at most adds a driver to Windows that loads when Windows starts. This serves the same functions as the more serious stuff, persistence & optionally file hiding, but anything hidden is visible when the driver doesn't load, when for example you use another, clean OS to look at the drive. It's sort of a reverse dual-use case that utilities that hide files &/or folders do basically the same thing, load software when Windows, starts telling Windows not to see hidden files/folders. And like the malware versions they can survive & work because most most Windows devices only have the one OS installed, & most people don't go looking, or defragging, or use CCleaner, or any of the other tools folks have mentioned that reveal hidden folders.

The main alternative way to hide files is to hide them in plain sight -- something else used by malware writers -- & since the Windows folder in a fresh win10 32 bit install has ~70k files & ~13k folders, you have both opportunity & camouflage. Nobody remembers the names of 13k legitimate folders let alone 70k files, plus you have all the other files & folders on the system disk. Truecrypt & successors like Veracrypt use encrypted virtual hard disks [VHDs], which are a single file that when opened [mounted] by software act like a normal hard drive. Their version of hiding stuff is to nest a encrypted VHD inside a encrypted VHD, based on the idea that if you for example have an OS installed on the 1st VHD, no one will notice the 2nd VHD file, again hiding in plain sight.

As far as the encryption goes, there are more than plenty of alternatives -- the simplest/easiest may be zip or 7zip -- but whatever you choose, back doors are generally to be avoided. That's because if/when there is a backdoor, you're dependent both on the integrity of anyone who knows how to access it, and their ability to keep that knowledge secure. The latter recently came to light with some software the US gov uses -- someone(s) basically got access to the code, found the back door, & inserted their own key so-to-speak in all shipping copies of that software.

If there's ANY way to get the encryption key back, there's a back door, & the encryption should not be considered secure. That may be all right if you're hiding your kid's birthday shopping list, but for stuff that could cost you money, e.g. something that would let anyone access your bank account(s), it's probably not a good choice. Beyond that you can research different ways to create & store a good password or key, e.g. if you store passwords online, what are the chances the service where you store them will get hacked, & you should research any cell or tablet security before you store passwords etc. on it, e.g. with more than one brand it's easy for a hacker to get a stored picture of the fingerprint you used to unlock it.

So, Wise Folder Hider Pro... it's here, it's free, it's easy, and it should work for you as long as you don't expect too much of it. I guess one way to put it is it's probably all right for the kind of stuff you put in an unlocked desk drawer -- stuff that you don't want to leave lying on top of your desk, but aren't really that concerned about hiding it from prying eyes. And if you maybe want to add a little more security &/or confidence, you could always encrypt whatever with 7Zip before you put it in the hidden & optionally encrypted folder.

The offering comes with this warning at the end of the description....

"Please note: this version doesn't have the function of getting back the password automatically!"

Can someone explain what this mean and how it will effect how the program works?

gpc111
It means that if you lose the password, you lose all the hidden folders and contents and can't recover them. I speak from experience...

Here is my problem with Wise Folder Hider.
If you use CCleaner's or Glary Utilities' disk analyzer, it will show ALL the names of those HIDDEN files!
Also, with a recover data program, you can get those hidden files.

As much as I love Wise Care 365 (and I really do) I'm not sure I see the point in this; Safehouse explorer is freeware and has really solid encryption...

YoWindow Weather
YoWindow is a unique new weather app. The magic of YoWindow is a living landscape that reflects your actual weather.
$2.99 ➞ vandaag gratis

WordDict : Word Search Puzzles
If you're looking for a classical word search game, this is for you!
$1.99 ➞ vandaag gratis

Pachoink!
The game boards provide the targets, but do you have the ball skills to take them all out?
$1.99 ➞ vandaag gratis